"Not that I mind new media douchebags by the way (I'm going out with one for a start) and not that I minded Meat Liquor either. But like a surly teenager it has a bit of an attitude problem..."


Chalk and cheese doesn't do my Friday night justice, it really was a game of two halves. I started off by mixing it with the hipsters, burgers and cocktails in jam jars at Meat Liquor, and then having eaten my fill (and then some more), made the short trip up the road to Wigmore Hall and the Razumovsky Ensemble. Where, never mind the hipsters, VD and I were almost certainly the only members of the audience not to be on the waiting list for a new hip.

Meat Liquor seems to have created a bit of a stir among London's hipsters, Hackney farmers and new media douchebags, and if the queues outside were anything to go by, the staff will be outfitting themselves in brand new Barbours, brogues and Ray-Bans soon enough. Obviously the dive bar / burger joint / crack den motif they've got going on is a big draw.

Not that I mind new media douchebags by the way (I'm going out with one for a start) and not that I minded Meat Liquor either. But like a surly teenager it has a bit of an attitude problem - the sign behind the bar proclaiming "no wankers, no dickheads, no shirtcocking, no parents and no gerbils"* was the kind of thing you might expect to see on the bedroom door of a suburban teen. I suppose it's ok to have this kind of witless crap on display if your staff don't contravene the rules. Unfortunately though one of the barmen decided ignore me even though I was absolutely gagging for an ale, and immediately found himself labelled a wanker.

Part of this attitude is the no booking policy, which is one of the new tactics being employed by restaurants that want to create a bit of buzz - think 10 Greek Street, Pitt Cue Co and Burger and Lobster. Nothing says I'm cool like long queue for a table on a Tuesday night and it probably deters the unwanted parents too. Fortunately though, VD and I were whisked almost straight in, but even at 6pm the place was virtually full.

The menu is pretty simple, with a couple of starters, six or seven burgers, some sides and a drinks list; dominated by cocktails, but with a smallish selection of wines and beers. Readers of my last post will be delighted to learn that the beers were of the craft variety, so I had a couple of Sierra Nevada pales ales (unfortunately they'd run out of the Little Creatures pale ale), while VD had a glass of wine, which, intriguingly, was served in a jam-jar.

This made me think, why a jam-jar? Are the staff just massive Branston Pickle fans and wanted a use for the left over jars? Did someone order a job lot by mistake and they needed a use for them? Or was it to compliment the crack-den atmosphere? You know, when you head over to your dealer for a glass of malbec and all his Riedel glasses are dirty, so you have to resort to the jam-jar?

As usual I digress, and so we move on  to the food, because that's why I was there. I have to say I enjoyed all of it, every last mouthful. The deep fried pickles were crisp, straight from the fryer and a perfect accompaniment to a cold beer; my green chilli cheeseburger was delicious, in a juicy, deeply savoury, slightly spicy, chin-dripper kind of a way; and the sides of onion rings and southern-style slaw were pretty faultless. VD, being the bloodthirsty type that she is, went for the dead hippy burger, which was also good, although the green chilli took the award for burger of the evening.

At six or seven quid for the burgers and three quid for the sides you can't really go wrong, but then you're not paying for a plate or cutlery, as the food is delivered on paper covered trays, school canteen style. The drinks were a bit more expensive, with the beer and wine both coming it at £4.50 and the cocktails around the £8 mark.

By the time we left at quarter past seven the queue was absolutely massive - to their credit the staff don't hurry you out of the door - and I'd imagine some of those people are still waiting for their table.

So would I return? The burgers are good, as are the sides, they serve decent beer, it ain't too pricey and there's a bit of atmosphere, but would I bother waiting for a couple of hours for a table? Not a chance, although if I fancy another early post-work, pre-Wigmore Hall dinner, I know where to head.

* unfortunately, and as you can see, it didn't say no parents, I was fibbing....but it should have done! 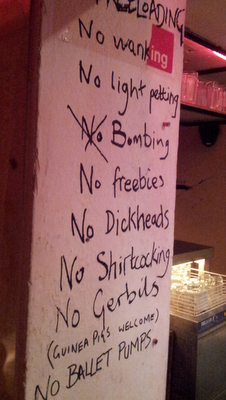