My Homage to Bettys: The Fat Rascal 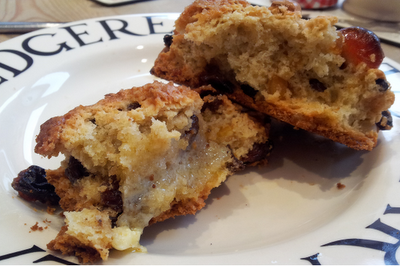 "...this time was different, and embracing what seemed like an impossible challenge, I decided to make my own in an attempt to match the efforts of Bettys' craft bakers!"

I generally get one of two reactions when I tell people I'm from Harrogate:

In answer to those questions: I'm not (that) posh and yes of course I have been to Bettys. I can't imagine there are many Harrogatonians who haven't joined the queue outside and waited a good 20 minutes before being ushered in though those welcoming doors by a frilly-aproned waitress (like Meat Liquor, there is a no-booking policy, although that's where the comparison ends!).

One of the things they are most famous for is a particular Yorkshire cake / biscuit called a 'fat rascal'. These are something akin to a rock bun or scone, and stuffed full of currants, raisins and mixed peel. Have one of these with a cup of Yorkshire tea in yer hand, a flat cap on yer 'ead and a whippet at yer feet, and you're in 'eaven.

When I'm back up north I try to grab a couple to bring back down to London, usually on the orders of my greedy girlfriend, who seems to be as obsessed with them as she is (inexplicably) with musical theatre. Given that I've just enjoyed an Easter weekend back in God's own county, you might have expected me to obey orders and dutifully head off to Bettys in order to grab a couple of rascals and perhaps a curd tart. However, this time was different, and embracing what seemed like an impossible challenge, I decided to make my own in an attempt to match the efforts of Bettys' craft bakers!

Well readers, they were a triumph. It would be rather immodest of me to say they were better than the ones you can get in Bettys, but they were not inferior, not by any stretch! So if you're too tight to buy a couple when you're up in Harrogate, or are unlucky enough not to be visiting soon, follow my easy recipe for a not too shoddy imitation.


The fat rascal demands to be eaten warm, with plenty of butter, so ideally tuck in straight away. However, you can keep them for a couple of days and re-heat in the oven. 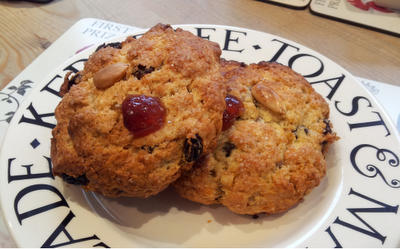