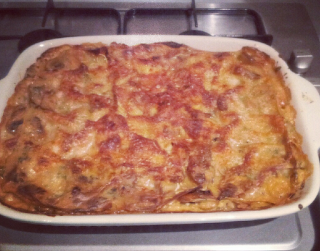 "If you have never attempted to cook anything from this blog before, I urge you, nay I implore you, to try this recipe on for size"


Those of you who are regular readers of this blog will be well used to the witty intros I provide for most of my recipes: an amusing anecdote perhaps, or some droll comment about the origins of the dish. However, not this time: other than the bare minimum there'll be no pissing about, fannying around or any other guff.

This dish is one of the finest I have cooked for a very long time and so I don't want to distract from it's sheer quality. If you have never attempted to cook anything from this blog before, I urge you, nay I implore you, to try this recipe on for size.

Vincisgrassi is a dish from Le Marche on the east coast of Italy, which, in over simplistic terms, is a lasagne where you  replace the beef ragu with mushrooms and air dried ham. There are considerably more complex versions of this dish around, some of which seem to employ a variety of unpalatable and strange ingredients - coxcombs and chicken foetuses  for example. (By the way I'm not joking - check out the recipe on about.com). Perhaps understandably, I didn't fancy any of these so stuck to a more conventional ham and mushroom version.

Vincisgrassi is best know to us Brits via a very talented Italian chef called Franco Taruschio, who used to run the Walnut Tree Inn in Abergavenny. Franco was something of a food hero and people still talk of him, and this dish in particular, in hushed and reverential terms. So rather than assume I can do better than the master himself, it is approximately his recipe which I've detailed below, along with a couple of my own very slight modifications.

Anyway, it looks like I've written slightly more than I intended, so without haste, to the recipe...

You'll also need a baking dish at least 20cm x 25cm and to heat the oven to 200C
If you are feeling very flush the final flourish to this magnificent dish would be a couple of shavings of white truffle, air-freighted in from Alba. If you can't stretch to that, a small sprinkling of good quality truffle salt would make a decent imitation. But it is superb without any of these additions, so don't worry if you don't have them.

Regarding a wine recommendation, predictably I'd go for something red and Italian - ideally from Le Marche, to match the origins of the dish.

p.s. I'm sorry about the poor quality of the picture. I made this for a dinner party, so didn't have time to spend taking multiple shots from multiple angles!